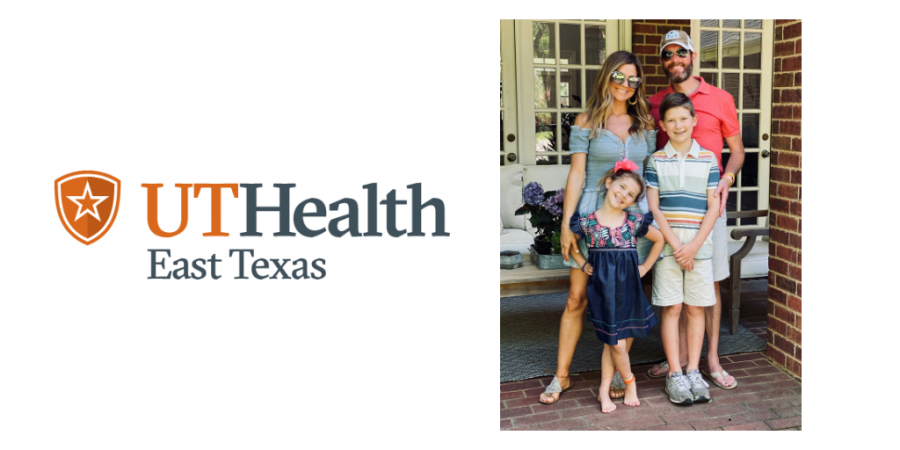 On November 28, 2011, Cody Chandler went to the emergency room at UT Health Tyler with what he thought was pneumonia. He had no idea the reality of what he was about to face. Not only did he have pneumonia in both lungs, he also was diagnosed with acute myelogenous leukemia (AML).

“This is a very aggressive malignancy of the white blood cells of the bone marrow,” Dr. Bob Droder, oncologist at UT Health East Texas HOPE Cancer Center said. “If not treated, it is usually lethal within a few months.”

Because the disease is so aggressive, Chandler’s treatment started immediately.

“Aggressive treatment with intravenous chemotherapy is necessary to eradicate the leukemia,” Dr. Droder said. “This also suppresses the normal bone marrow cells for a few weeks, so the patient has no effective blood cells to fight infection, clot the blood and carry oxygen. For this reason he needed to stay hospitalized, getting transfusions and antibiotics.”

Chandler spent the next month in the hospital fighting for his life.

“The first month was crazy,” Chandler said. “I was completely helpless. I couldn’t walk, take care of myself, shower or eat. I lost my voice, had surgeries to stop bleeding in my stomach, multiple lung and bone marrow biopsies, spinal taps, pneumonia, fevers, infections, blinding, terrible sweats, pain and throat scarring. My wife and the nurses on 6 North, the oncology floor, literally cared for me like I was a baby. It was a remarkably humbling experience.”

After the first month of treatment, Chandler went into remission, but his journey was not over.

“Residual leukemia was still present, so further doses of less intensive, but still very aggressive chemo were needed,” Dr. Droder said. “He was given four cycles of this consolidation chemo (ARA-C).”

Chandler’s immune system was very weak due to the treatments, making him susceptible to infection, which meant many nights spent in the hospital.

“I spent a significant amount of time in the hospital fighting infections for weeks at a time, just to get out and catch something that would bring me right back.” Chandler said. “At first, I could not stand being in the hospital, but then it became the only place I felt safe and eventually felt like my second family. The nurses on 6 North and at HOPE helped me through the most difficult thing I have ever experienced.”

Though he had a strong support system around him, he still felt alone.

“It’s hard to explain, but even though so many people cared for me and stood by my side, I felt so scared and alone,” Chandler said. “But, to this day, I get an overwhelming calm when I’m around specific people who cared for me, especially my little boy, Noah, who was only 1 at the time. God gave me a special little boy who was caring for me, even when I could not care for him.”

The one person who may have had it tougher than Chandler was his wife, Jodi.

“She was my ultimate caregiver,” Chandler said. “I would not be here if it weren’t for her fighting by my side through the physical and emotional struggles during and after treatment. She cared for me without reservation and never complained. I can’t imagine how hard that was.”

Through his time in the hospital and the HOPE Cancer Center, Chandler built strong, lasting relationships with his caregivers.

“Dr. Droder is not just my doctor,” Chandler said. “To this day, Dr. Droder sits with me, talks to me, takes time to counsel me, and supports me with what I continue to face. He truly listens and I know he cares tremendously. He will always be ‘my’ doctor. He is truly special.”

“My nurses on 6 North, especially Candice (Freeman) and Renee (Gilbreath) were amazing,” Chandler said. “They were so protective and would do everything they could to make the process easier, better and faster. Candice will still go out of her way simply to check on me.”

Through all the pain and bad days, Chandler considers his cancer a blessing.

“I shouldn’t be here,” Chandler said. “As hard as it was, it’s one of the greatest things I’ve ever been blessed with. Once you truly face death and lose everything, you realize very quickly what’s really important. God showed me grace and continues to walk with me in so many forms. It’s such a blessing.”

Chandler is now considered cured and his chance of relapse is very low. His immune system never fully recovered, but he’s able to live a normal, happy life.

“Since my treatment ended, I’ve done several triathlons and running events,” Chandler said. “I ran a marathon last year with the Leukemia & Lymphoma Society and Team in Training. It was so inspiring. Jodi and I were even able to have a beautiful daughter. It was a miracle.”

Chandler and his family are grateful for the care he received that saved his life.

“I’m absolutely thankful I landed at UT Health and HOPE when I was diagnosed,” Chandler said. “There are so many stories, but at the end of the day, Dr. Droder and all the nurses on 6 North and at HOPE Cancer Center saved my life.”

Cancer is the second leading cause of death in both men and women. To learn more about cancer care at UT Health East Texas, visit UTHealthEastTexas.com or call 903-596-DOCS to schedule an appointment.

This story is featured in the June/July 2020 issue of Tyler Today.